The next few sets of photos aren't necessarily in the order that they occured - within the sets they are, but the sets themselves aren't.

Also, because of the number of photos I'm gonna put them up slightly smaller that I usually do, but if you click on them then you'll be brought to my Flickr account where you can download what usually are 640X480 sized versions of the pics.

And if you want the originals, then you know where to get me.

So these were taken at Umer's party on Monday night (Dec 18th). Was great fun - the food was great, the company was too, and all-in-all a fairly chilled night. The photos don't adequately reflect the mood, but the photos taken without the flash tended to turn out, well, underexposed. The music was controlled by a council and hot-seat-person (though there also seemed to be a tyrant who had powers of veto :P), and the crowd was varied but on similar-enough-wavelengths to flow...

Enough rambling, now for the pics. Apologies if the names are spelt wrongly, drop me a line and I'll fix them up. 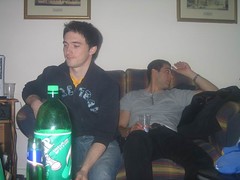 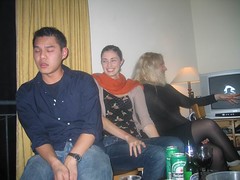 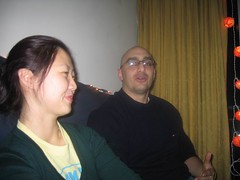 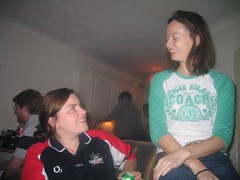 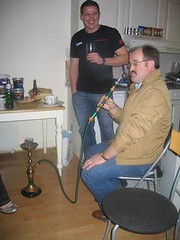 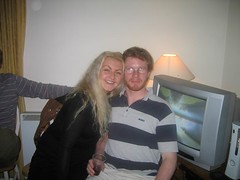 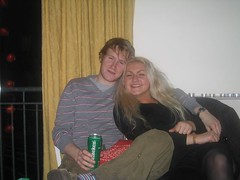 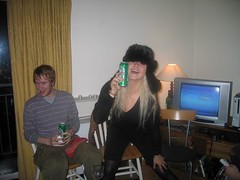 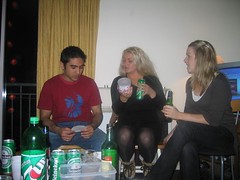 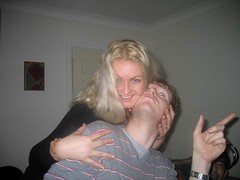 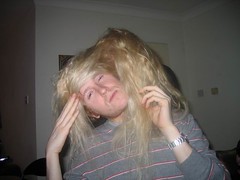 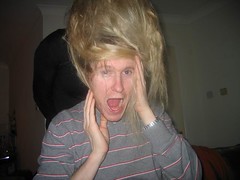 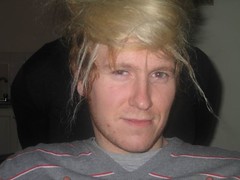 Ruairi and Marie (though you can't always see her :D) 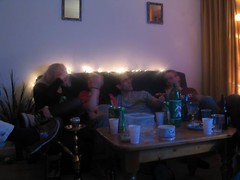 The past few days have been fairly hectic, and I've not been able to update as much as I've wanted to. Still, I'm here now, and here are some of the things that have taken place since.

Last Friday was Café En Seine, for Charm's birthday, and the resulting grainy photos from my Treo will surface one day soon right here. Needless to say, there was a fairly large amount of alcohol consumed, and thus the rest of the weekend was mainly rest.

And Tuesday was Cor Na Lianna's Christmas performance, which was great. And then onto Café En Seine again. (If I keep referring to it, I think I'll have to take a pic of it soon!) Some pics from that soon too...

But in the meantime, I bring you pictures of parts of Dublin on a clear winter's night. The only clear night of the past week, actually! (All taken Tuesday the 12th of December, 2006) 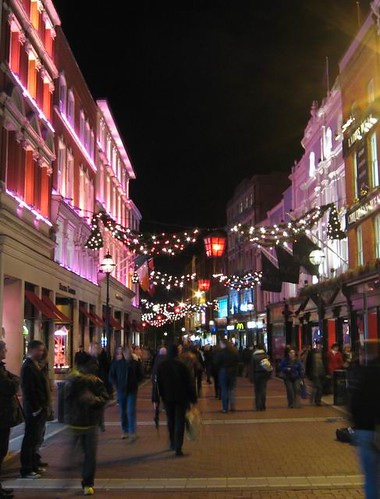 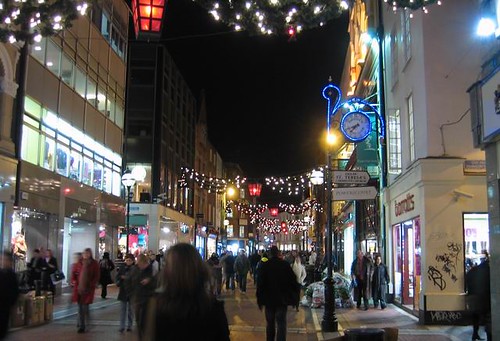 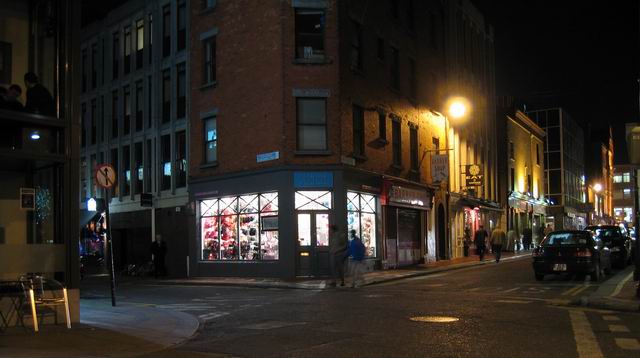 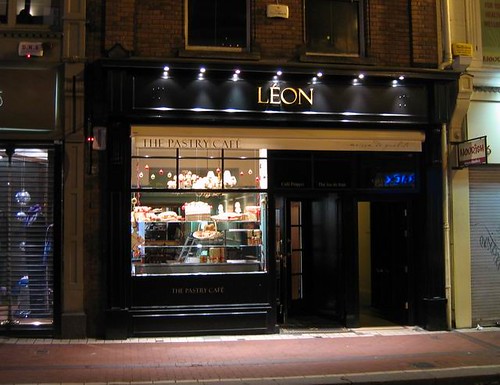 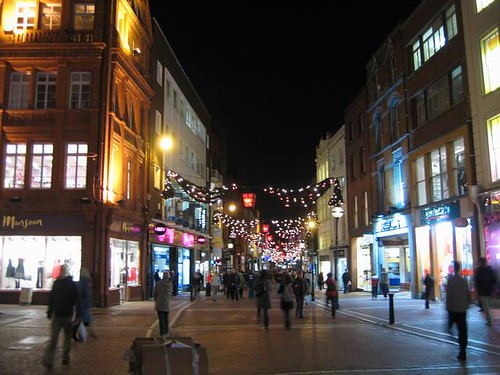 Chatting to a classmate last night, about Happy Feet beating Casino Royale at the American box office, when he wondered if I was jumping on the American bandwagon. He mentioned that Tony Blair had, and look where it had got him!

Well, yes. Tony Blair did, and so did some other people.

But the thing is that American culture and events influence so much of our lives, really, no matter where you are. I can't speak for Africa, but Asia is definitely heading in that direction, and advertising doesn't help - although it caters to the market that's there, it subtly shifts our preferences over the long term.

Some things American are great. Others less so. Let's hope that we recognise that there are things non-American that make more sense, and which are in many ways preferable. But also conversely that supporting something that's American doesn't necessarily make us a bad person in any way, as long as we have valid reasons for doing so.

I've re-discovered the pleasure of settling down with a hot mug of tea.

So much TV nowadays is complete and utter rubbish. For some reason, a lot of the American comedies drive me mad, though I did use to like them before...

I miss friends in Sydney, both the ones I know well, as well as the ones I don't know so well.

In an attempt to be really really frugal (cheap) I went to Reads (the photocopying shop) to photocopy a book.

And in my moment of frugality, I decided to walk there from hospital.  And I had to make 4 extra copies for friends.

Sleepy and achey now, I think it's time for bed.

Albums (coz I'm old school) I'm listening to at the moment, ie on constant rotation - probably not exhastive, but here are a few:

And Broken Social Scene's You Forgot In Me is an incredible musical journey, from start to finish. Best listened to with the lights turned off, to let your imagination bring you where the music does... 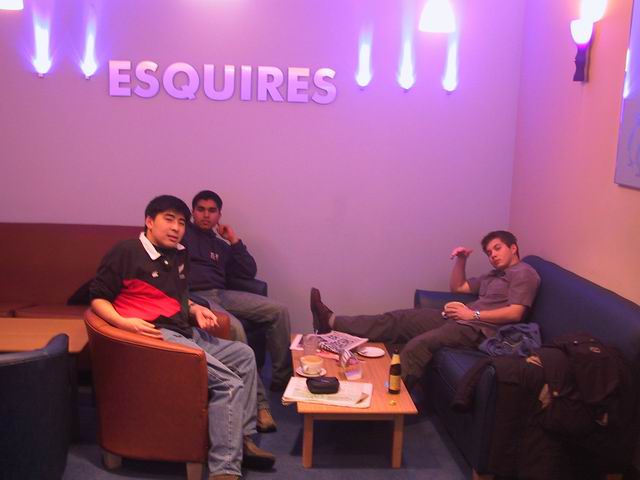 
An amazing amount of backstabbing that went on today - and I'm not talking about Med students! Although I hear there are threats of a lawsuit flying around within the Trinity Medical School system...

But no, on this occasion it was by grown men, it's becoming seemingly obvious that there are divisions between certain personalities of the Board, and that it's rapidly becoming an apartment owner vs house owner thing. It's incredibly interesting, though even though I'm a latecomer to the board, I'm not spared the recruiting that's taking place between the sides. Anyway, there were grown men raising their voices (which is nothing new) and also attempts to be polite at the table, whilst later on on a one-to-one basis there was certain name-calling and pretty ugly descriptions of the other folk. Is this what awaits me in the real world?

Otherwise I think I'm coming down with a cough, perhaps the precursor to some chest infection of some sort. I did get caught in the rain, nay, got absolutely soaked on Saturday night, and probably shouldn't expect anything less than this, but still with the wintery days here, the wind and the rain, as well as Christmas approaching, I really shouldn't like to get sick *now*.

No lectures tomorrow - just tutes in hospital, I'd probably like to make it to the library and the photocopy store to make copies of Medical and Surgical Finals, as well as to get through my Clinical Examinations book for the first time. Although I also want to finish The Line Of Beauty, so that I can start on The Alchemist!

Anyways, time do sip gently the cup of tea sitting here, unfortunately my search for Gen Mai Cha has proved fruitless, so Green Tea with Lemon is what I have to settle with... Til next time, folks!

A new thing I think I'm gonna start is recording the Wikipedia pages that I visit - a lot fot his stuff makes for incredibly interesting reading, at least to me...

These are of the three places in which I've lived in my life:

And schools I've been to:

An issue yesterday, where people got irritated and tempers got frayed, yet only one showed it like a spoilt brat, ruining the mood of the people around.

Other than that, went to Sin for a friend's birthday, and then on to Café En Seine for another friend's birthday. But alas, CES is the worst place to try to get into at Saturday midnight, and the rain was lashing down, and so I hailed the next cab I found. Would have loved to go in, but it really made no sense to be standing out there in the rain, and then later be fighting with the hordes to get a cab home.

The past week's been incredibly tiring, and I'm definitely not looking forward to the coming two weeks. I feel like my weekend's been wasted mostly, I had wanted to go out for a big weekend out, hopefully the next one's alright though.

Looking at prices for an Ipod Nano to replace my still-functioning-but-battery-dying Mini, it seems like 8gb is the logical step up, and my dad said it's my Xmas pressie. Was considering a GPS dongle for my Treo, but I suppose it's not the most necessary thing for Dublin. I've a week to decide anyway.

This week's a crud of a week - just because of time factors and places I have to be. Monday evening's the meeting for the property management. And then things for the rest of the week, though not completely set yet. It will be good, but I'll be exhausted by the end of it.

Right, this is beginning to take on the shape of a brainpurge, so I'd prob best be leaving it here and getting back to Tripping Over...
Collapse